- December 08, 2011
The past few years have seen increasing interest in potential strategies to reduce the risk of allergy and asthma in young children. One particularly popular topic has been that of early pet exposure potentially decreasing the risk of animal allergy. Indeed, I am often asked by parents of my young patients if I recommend adding a furry pet to the household. However, it has been unclear how early in life the pet exposure needs to occur in order to modify risk. 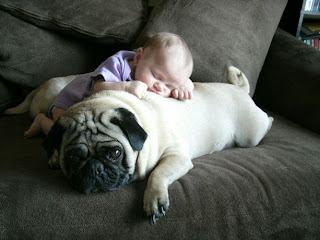 A recent analysis of data from the Detroit Childhood Allergy Study sheds some light on this important question. It was published in the July 2011 issue of the peer-reviewed medical journal Clinical & Experimental Allergy. (Clin Exp Allergy. 2011;41:920-922)
Annual interviews from 1987 through 1989, and follow-up interviews at age 18 years, were used to assess study subjects' exposure to indoor dogs and cats. After analyzing pet exposure during the first year of life, specific age ranges, and cumulative lifetime exposure, here's what the researchers discovered:
Cats: For both boys and girls, exposure to household cats during the first year of life was associated with a decreased risk of sensitization to cat at age 18 years. The relative risk (RR) of sensitization was 0.52 compared to children without cat exposure during this time. However, there did not appear to be benefit conferred from cat exposure during later time frames.
Dogs: For both boys and girls born by cesarean section, exposure to household dogs within the first year of life was associated with decreased risk of dog sensitization at age 18 years (RR = 0.33). However, if delivery method was not taken into account, the reduction in risk was significant only for boys (RR = 0.52). Sorry, girls!
Bottom line? Early exposure to household cats and dogs does appear to modify the risk of future hypersensitivity (there is actually some evidence to suggest the tolerance induced during this early period may be long-lived), but the window of opportunity is very small. The benefit does not seem to extend to exposures beginning after the first birthday. As most parents are disinclined to bring a new baby and a new pet into the home simultaneously, it is likely that the main beneficiaries of this protective effect are children born into households where Fido or Fluffy are already firmly established.
Allergies Pets

Thanks for taking the time to comment on this blog's posts! Let's keep the discussion engaging and free of frivolous advertising or vulgarity. It's a family show, folks!

Popular posts from this blog

My 6 year son old just got over a rite of passage - strep throat and scarlet fever. Unfortunately, before we could even celebrate his recovery, I noticed a swelling on the left side of his neck. It was red and tender, and it was GROWING. The pediatrician in me worried, "Damn. Lymphadenitis (infected lymph node)". No sooner had we finished one course of antibiotics than we were onto another, and the side effects were bad enough to keep him out of school for another three days. Why did my munchkin suffer so? My answer: Drug allergy. Group A streptococcal bacteria (the cause of strep throat and scarlet fever) is remarkably sensitive to penicillin. Penicillin is the first choice treatment for strep throat, and has been proven to reduce the risk of developing rheumatic fever, a post-infectious complication which can result in chronic heart disease. Problem is, my son is allergic to antibiotics in the penicillin family. At 11 months of age (8 days into his second ever co
Read more

Keratosis Pilaris - Or, Why My Kid Looks Like a Plucked Chicken

The skin is the body's largest organ. The condition of the skin is, in many ways, a window into our internal health. Therefore, it is only natural that people become immediately concerned by rashes. We often neglect our own elevated blood pressure, achey joints, or other ailments. The onset of a new rash, on the other hand, can quickly lead to a call to the doctor. Interestingly, there is one rash I see in my practice which rarely causes alarm among patients and parents. In fact, it is common for a parent to state, "Oh, that? His sister has that too. In fact, so do I!" Keratosis Pilaris is a common, heritable disorder which results in small bumps consisting of accumulated skin cells and keratin at the sites of hair follicles. It is especially common in people who have a history of allergies. Although it can be mildly itchy, the rash generally does not cause discomfort. Commonly described as "gooseflesh", keratosis pilaris can be a concern cosmetically, lea
Read more

Son #2 woke up this morning looking like a streetfighter! Dramatic swelling of the eye(s) such as this can occur for a variety of reasons: 1. Allergic reaction to ingested food or drug (generally affects both eyes) 2. Direct contact with environmental allergen or food allergen (can affect one or both eyes) 3. Hereditary or acquired angioedema (can affect one or both eyes) 4. Injury (usually affects one eye) 5. Low protein levels (generally affects both eyes) 6. Infection (generally affects one eye) 7. Insect bite (can affect one or both eyes) In this case, my little one endured a mosquito bite at the outer corner of his left eye yesterday afternoon.  It was mildly swollen at the time, and became progressively worse as the night wore on. Does this mean he has a mosquito allergy? Actually, no more than anyone else.  Certain areas of skin, such as around the eyes and on the lips, are more loosely attached to underlying tissues and muscles than skin elsewhere on the body.  Thi
Read more

Sakina Bajowala, MD
Hi, I'm Sakina Bajowala, MD. I am a Pediatric Allergist and Immunologist, and I believe the internet and social media are incredible tools for medical education and patient empowerment. I blog to share my perspectives on parenting kids with allergies, parenting in general, integrative medicine, medical technology, and physician wellness. Please subscribe if you'd like to learn more!