Showing posts from February, 2009
Show all

- February 25, 2009
We are learning more and more about how life in Mommy's womb affects our health later on in life. A recently published study in PLoS One has supported an association between maternal exposure to airborne byproducts of burning fuel (polycyclic aromatic hydrocarbons) and a parental report of asthma symptoms before age 5. Turns out that prenatal exposure to this type of air pollution is associated with an alteration of certain DNA sequences- which are, in turn, associated with higher odds of reported asthma symptoms. Although this study only shows an association, and does not confirm causality, it is very interesting. We already knew that air pollution is a key contributor to asthma exacerbations, but now we have evidence that traffic-related pollution may be contributing to the development of the disease itself. This may help explain why inner-city children have such high rates of asthma. In any case, we now have yet another reason to contact our state and federal representat
Post a Comment
Read more 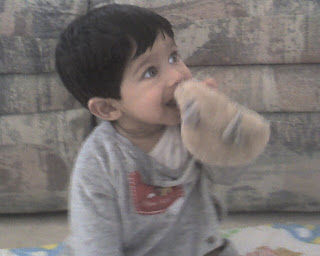 Only an allergist would give her kid a stuffed dust mite to play with.
Post a Comment
Read more

- February 23, 2009
As a parent and pediatrician, I have considered acetaminophen (Tylenol) to be one of the medications I could pretty much always safely use for my children and patients. However, a new study published in the Annals of Allergy, Asthma & Immunology has raised some important concerns. 345 women were followed from early pregnancy through their child's first birthday. Associations between acetaminophen use during pregnancy and the development of wheezing during the first year of life were investigated. What was found is the following: Acetaminophen use during early pregnancy was unrelated to respiratory events during the first year of life. However, acetaminophen exposure during mid to late pregnancy was associated with nearly double the risk of wheezing (odds ratio 1.8) and slightly more than double the risk of wheezing that caused sleep disturbance (odds ratio 2.1) during the first year of life. Why might his be the case? Acetaminophen depletes an imprtant antioxidant (gl
Post a Comment
Read more

The Importance of a Detailed Food Diary...

- February 19, 2009
Son #2 did not sleep well last night- lots of whining and refusing to sleep anywhere but my lap... :( I initially couldn't figure out what the problem was, but it became clear when I switched on the light during a diaper change- little munchkin was covered in an itchy red bumpy rash ! He's had eczema and hives before, but it resolved completely with the elimination of strawberries from my diet almost 3 months ago (I'm still nursing, and he is allergic). This morning, after giving him a bath, lubing him up with hydrocortisone and petroleum jelly, and forcing some Zyrtec into his mouth, the detective work began. Hopefully, writing down my process here will help you understand how your allergist determines which exposures are most likely to be triggering allergic symptoms in you or your kids. Rash is generalized (on face and body)- so it could be either something ingested (food sensitivity) or something applied to the skin topically (lotion, detergent, etc...) Let's
Post a Comment
Read more 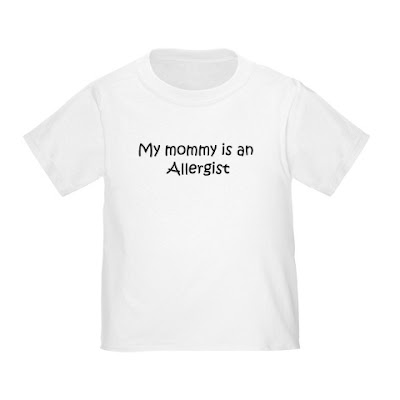 My Take on Vaccinations

- February 17, 2009
Just returned from Son #2's 6 month check-up, where he received a couple of jabs to his chubby little thighs. (brave boy- hardly even cried!) I am often asked about the safety of vaccines by concerned parents who are frightened that they are putting their children at risk of adverse reactions by following the recommended immunization schedule. I fully understand the sentiment behind not wanting to take a risk (even if it is only a perceived risk) when the diseases we vaccinate against seem like ancient history. Let me put it plainly- the fact that these illnesses: polio, mumps, measles, diphtheria... seem like history is testament to the enormous public health success of immunizing children. Immunizations are the reason that we don't lose our precious children to horrible diseases like epiglottitis, meningitis, and measles at the alarming rates seen in previous generations. Let me use measles as an example, as the U.S. Court of Federal Claims recently delivered decisions o
Post a Comment
Read more

- February 15, 2009
According to a study recently published in Thorax , children born by caesarean section have a higher risk of asthma than those born by vaginal delivery, particularly children of allergic parents. The odds of having a diagnosis of asthma at 8 years of age was almost 1.8 times higher for children born by C-section than for children born by vaginal delivery. A proposed reason for this association is that babies who do not pass through the birth canal on their way into the world take longer to become colonized with the usual bacteria- or that, in essence, they are too clean. :) The bacteria are thought to keep the immune system geared in a non-allergic direction, and when you don't have the right balance of bacteria, your risk of allergic disease (like asthma) increases. This is the crux of the so-called "hygeine hypothesis", which seems to be garnering more and more support as the evidence accumulates. Guess who has two C-section babies? No asthma yet, but son #2 has
Post a Comment
Read more

On Being a "Good-Enough" Mother...

- February 13, 2009
I read in a magazine the other day, "You don't have to be perfect to be be their perfect mother." I just about hugged the magazine to my chest and cried. It feels good to be validated once in a while, doesn't it? So, in honor of the upcoming Valentine's Day holiday, here is my love letter to mothers everywhere: You rock. Don't feel bad if you used disposable diapers instead of washing poop out of cloth nappies 5 times a day. Odds are, your child is not going to get butt cancer. Don't feel guilty about not saving every piece of unidentifiable artwork that your child brings home from school. Son #1 has brought home at least 23 versions of the same drawing of a rainbow and pot of mashed up fruit over the past 2 months. I gush over them, and promptly send them to the recycling bin. Trust me, he'll make more. Don't feel like you're neglecting your kids if you have to work and they spend some time in daycare. God bless you for provid
Post a Comment
Read more

- February 11, 2009
If your child has severe food allergies, you know that even sending them to school can be stress-inducing on occasion. What if they mistakenly ingest something that they are allergic to, and you're not there to protect them? Cutting those apron-strings is difficult for any parent, but when your child has a potentially life-threatening health condition that can come on so suddenly, it's even harder. You've done all you can to educate your child about their food allergies and have taught them to advocate for themselves (Son #1 states on a regular basis, "I can eat pistachios, but I don't eat peanuts because they will make me sick!"). But how can you be sure that your child's teachers and school nurses know to take food allergies seriously, can recognize the early stages of a food allergy reaction, and know how to provide quick, effective treatment? This is your opportunity! The Food Allergy Anaphylaxis Network (FAAN) has available a limited number of
Post a Comment
Read more

- February 10, 2009
My family was invited to a religious function followed by dinner at our place of worship tonight, and sitting with us was an adorable one year old girl with a horrible case of eczema all over her face. The meal consisted of egg-covered chicken, a peanut-based stew, and a coconut-flavored dessert. (As you can probably guess, son #1 didn't do a whole lot of eating at this event...) ;) The little girl's mom offered her bites of the meal, which the baby promptly refused. Throughout the dinner, I was distracted by the thought that the child's skin condition may very well have its roots in the food she was being fed. It was all I could do to keep from blurting out, "I'm sorry, but I noticed that your daughter has a pretty severe case of eczema. Has she been tested for food allergies?" Now, I know that this sounds like an unabashed plug for my profession. That's why I never said anything... and now, I am kicking myself. I feel like I let slip away from m
Post a Comment
Read more

How I Busted My Nose Open at the Grocery Store- Or, Why Being a Doctor Doesn't Necessarily Mean that You're Smart

- February 09, 2009
My husband, Mansoor, and I were discussing a few weeks ago how sad it was that we essentially gave up entertaining after the birth of our first child (nearly 4 years ago!). We determined that in order to convince our friends that we're not horrible mooches, we really should invite people over more often. That was the conversation that begat the onslaught of weekly dinner parties stretching from February 7th to March 7th. So while Mansoor distracted son #1 at the zoo, I took the baby with me to the grocery store to pick up some supplies. This was my first mistake (I make quite a few in this story- we'll keep count, just for kicks). Baby's snoozing- so not wanting to wake him, I elect not to remove him from the carseat. Rather, mommygenius decides to maneuver the entire gigantic plastic bucket baby holder into the grocery cart. Carseat + baby = 23 lbs. (mistake #2) OK- let's get these foodstuffs quickly, before baby wakes up! Oops... grocery cart already full o
Post a Comment
Read more

Welcome to the Allergist Mommy Blog!

- February 09, 2009
Do you refuse to leave the house without: (1) Kleenex (2) Benadryl (3) some form of peanut/tree-nut-free snack? Welcome to my world. My name is Sakina Bajowala, and I am a "Dr. Mom". An allergist-mommy , to be precise. Back in the days of medical school, I decided that it didn't make much sense to go through all of the time and effort to become a physician if you weren't going to be able to take care of your own kids. So, I became a pediatrician. Then I decided that it didn't make much sense to have the knowledge to treat my kids if there wasn't anything wrong with them. So, I gave them my genetic propensity for allergies and asthma and became an allergist. :) This blog is my account of life as a smoothie: Equal parts mommy, wife, and physician. I'll discuss the latest in allergy evaluation and treatment, share tips for finding something good to eat for kiddos who like to turn red and scratch themselves, and allow my foibles to remind us all tha
Post a Comment
Read more

Sakina Bajowala, MD
Hi, I'm Sakina Bajowala, MD. I am a Pediatric Allergist and Immunologist, and I believe the internet and social media are incredible tools for medical education and patient empowerment. I blog to share my perspectives on parenting kids with allergies, parenting in general, integrative medicine, medical technology, and physician wellness. Please subscribe if you'd like to learn more!